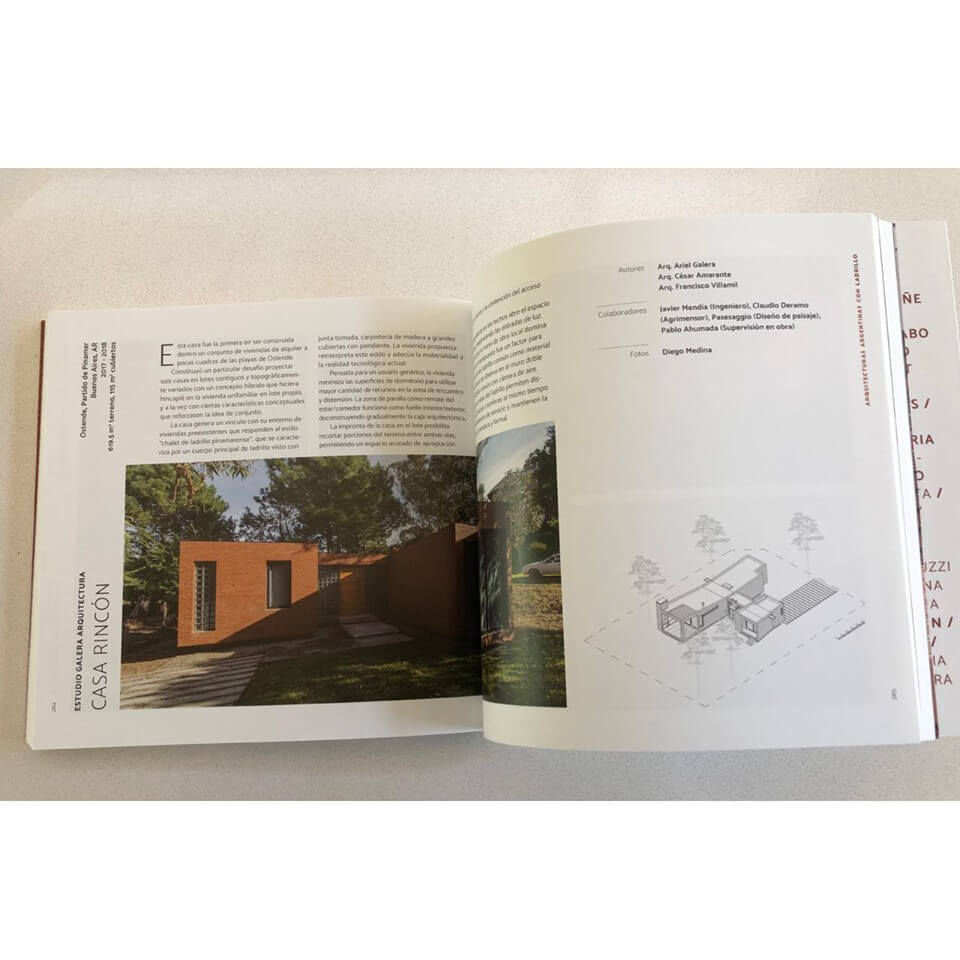 Casa Rincón selected to be part of the selection of contemporary brick architecture works.

Argentinian architectures with brick.- Each work is the result of the crossing of tangible and intangible variables that very rarely can be synthesized to count in a coherent way once the work is finished. Casa Rincón is perhaps one of the most rational works of our office, a very conditioned project where, as seldom the improbable time-economy-environment-labor-future variables were imposed from the beginning, it is so because of the imposition of reason The BRICK prevailed in this project as the material that had to fulfill the function of enclosure and structure. Develop in this post each of the specific reasons that justified the choice of the BRICK would make it extremely long, no doubt those reasons and others such as history, uses and relevance are expanded and developed in a general and comprehensive way in a book that we consider It must be part of the reference biography. Casa Rincón has just been published with 37 other works built in the Country by BISMAN EDICIONES and the UM, compiled under the name Arquitecturas Argentinas con Brick. This post is our way of thanking the editorial team for including our work in a book that is much more than a catalog of works that we are honored to be part of and that we insist on recommending for its quality and “Thickness” of content.-
The work compiles an extensive panorama of new architecture built with bricks in the whole country. Produced by Bisman Ediciones and co-edited with the UNICER group and the University of Morón, it also has the support of the Catholic University of Córdoba. “Brick is the most validated building material by the collective imaginary. His image accompanies the architecture of the entire planet since the beginning of time and, in Argentina, has developed a vast tradition, which is deeply detailed in the exciting historical chapter that introduces this book and that has prompted us to edit this publication , paradoxically absent until now, ”they said from Bisman Ediciones. In addition, to this set of recent works is added an analysis of iconic brick constructions from the colony until 2003. This compilation was made by the prestigious specialized historian Norberto Feal. The book also includes a series of technical notes made by the Unicer Group, the Faculty of Architecture, Design, Art and Urbanism of the University of Morón and the Faculty of Architecture of the Catholic University of Córdoba. Some of the studies whose works will be published in the book:
Arq. S. Viale + Arq. I. Dutari + Ing. A. Paz / Besonias Almeida Arquitectos + Luciano Kruk Arquitectos / MOARQS + Ottolenghi / Cekada-Romanos Arquitectos / Estudio Villafañe / Ventura Virzi Arquitectos / Raizalcubo Arquitectura / Estudio Arzubialde / Estudio BaBO / Estudiotrama + Arqtipo / Arquitecto Marco Rampulla / Diego Arraigada Arquitectos / BLT Arquitectos / Centro Cero Estudio / Alric Galindez Arquitectos + F. Lloveras / Miguel Ortego Arquitecto / Arq. Nicolás Campodonico / Estudio Botteri-Connell / Valeria del Vecchio Arquitecta / Estudio del Puerto – Sardin / Grinberg-Konterllnik arqs. / Federico Marinaro Arquitecto / Mariel Suarez Arquitecta / A4 Estudio / Estudio Borrachia Arquitectos / Nicolás Pinto da Mota arquitecto / Agustín Berzero y Valeria Jaros arquitectos / BAAG I Buenos Aires Arquitectura Grupal / Luli Marcuzzi Arq / LKM Arquitectos / Francisco Cadau Oficina de Arquitectura / 2.26 Arquitectos / Arqs. Julia Capomaggi + Laura Geraci / Arq. Pablo Senmartin / Oficina de Arq. del Poder Judicial de Santa Fe / Estudio Galera Arquitectura / Estudio Alarcia Ferrer / Estudio Cella / Valor Gris Arquitectura. Mas Imágenes del libro.-